As a result of my injury in Tampa Bay, I thought I would share some research brought to my attention on swimming mechanics related to neck and spinal injuries.
I have selectively edited this rather long article for the high points, be warned it is very detailed and for none swimmers, well boring. But for those OW swimmers I think you will find this invaluable.
Here are some close up pictures from Tampa showing the affects of wave action on my body position, arm recovery. as you can see the influences of wave movement force very different stroke patterns and technique in Open Water.
Spinal Musculoskeletal Injuries Associated with Swimming: A Discussion of Technique
Henry Pollard BSc, GradDipChiro, GradDipAppSc, MSportSc, PhD. * Matt Fernandez BSportSc, MChiro. †
Abstract Objectives: To review the biomechanics of the swimming stroke and examine common injuries which occur in swimming. A review of diagnosis and management strategies of these injuries is also performed.

Listening to your body - Tampa Bay Injury
Medical follow up yesterday after last weeks Tampa Bay muscle pull(s) of the under arm area appear to have identified the inter-costal's (no not inter-coastal's). My coach Marcia Cleveland, the Doc's and Paul Sullivan helped finding this out and below is a nice layman version of what it looks like and treatment.
Good news is that my stabbing pain has subsided, muscle tenderness and soreness specifically in this area still persists. I got in for the first time this morning and swam a very easy 1500 yards and felt pretty good however the shoulder and arm recovery are noticeably tight and tender.
At this point I am doing 3 days a week of PT, oral steroids and celebrex to reduce inflammation. I plan to continue to easily swim this next week to see how it progresses but focus on alternative exercises to keep fitness in the forefront.
Here is a nice article my coach Marcia found for me that illustrates the injury. Here is also a link
INTERCOSTAL MUSCLE STRAIN
The thoracic spine consists of twelve vertebrae which each connect to a pair or ribs. The upper seven ribs are connected directly to the chest bone/sternum and are termed true ribs whereas the lower five ribs do not attach directly to the sternum and are defined false ribs.

The intercostal muscles consists of several groups of muscles ((internal and external intercostals and subcostal and transverse thoracic muscles) which are located between the ribs and function to move and stabilise the chest wall.
These muscles can become strained often as a result of rapid twisting of the torso and are common in sports such as basket ball and tennis.
Muscle strains have three gradings:
Symptoms commonly reported are either a sharp, stabbing pains when breathing to a ever-present, painful ache or soreness located around the ribcage.  The pain is aggravated by deep breathing, side bending and twisting.
The degree of disability along with the rate of recovery will depend on the grade of the muscle strain. Given above is a general guideline as to the rate of recovery from a muscle strain per se however, the healing time may be longer due to our constant need to breathe and therefore low grade irritation to the healing site
TREATMENT FOR AN INTERCOSTAL STRAIN
There is a degree of cross over between the symptoms of a rib fracture and an intercostal strain and so before treatment commences it is pertinent to have a thorough
orthopaedic and neurological assessment.
Once an intercostal muscle strain has been diagnosed, the intial stages of care will be focused on reducing the inflammation and bleeding at the injury site through rest and icing.

Looks Like a level 1 or 2 so this is good news. Just another life challenge in the Journey to cross the English channel.
Posted by One_Stroke_at_a_Time at 10:27 AM 2 comments:

La Jolla Cove - Calm before the Storm (sort of)

Conquering Fear - Fear of anything in life can only be done when one takes that first stroke (step).
One thing you don't hear talked about much by endurance athletes, especially open water types, are their personal fears. The ones they had to conquer to get where they are today. These same ones that embed themselves into everyday life, that when un-checked can paralyze you mentally, then physically. Perhaps it comes with the territory, but as I learned this trip, ones fear must be overcome in small steps, each day by taking One Stroke at a Time.
Being honest with ones self is paramount to realizing ones dreams, success or failure. 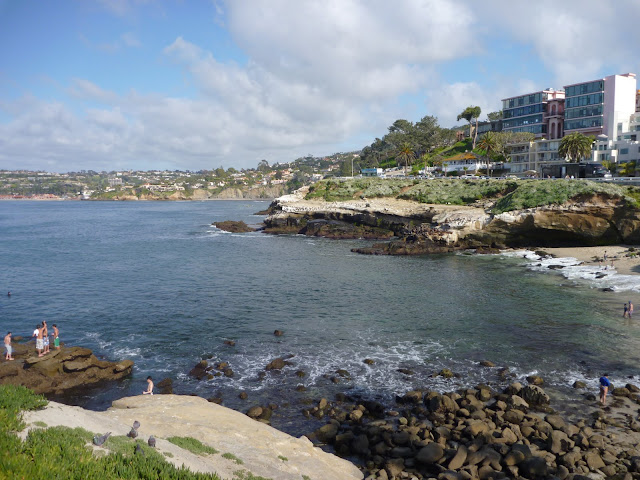 Two weeks ago, business took me to San Diego, CA for an entire week. So I reached out to my loose network of open water swimmers and asked for connections to swimmers in the area and specifically La Jolla Cove where I knew many OW swimmers resided, many of them world class English Channel, Maui and other named swims. Little did I realize the warm welcome that awaited me, hospitality and new made friendships. Little did I know that later in the week some of the biggest surf was coming my way! 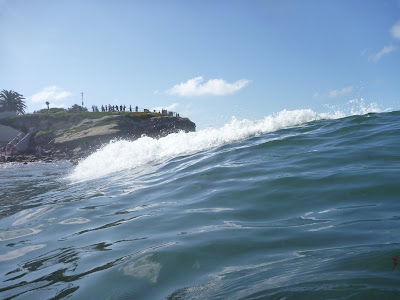 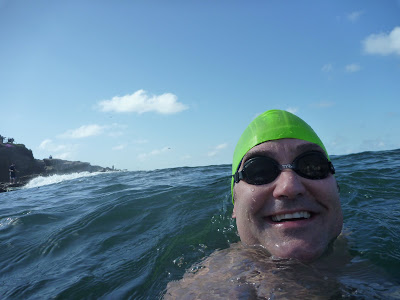 First I will thank Tom Hecker, Marta, Sickie at UCSD and all the folks that were kind enough to correspond with me via email, to host me at the morning outdoor 50 meter pool at UCSD and then especially Tom Hecker for La Jolla Cove Athletic club access, introductions and showing me the ropes. It was a long work week but a great training week.

The below video clip was supplied by Tom Hecker from an earlier date. Tom jokingly sent it along as both a reminder of similar conditions we had just swum but also to remind me of the 'step I took' in my journey to cross the English Channel.


All week I had been swimming around the cove after work, a mile here a mile there, to the other side in mild wind (5 knots or less best guess, so a calm day). The water was 58f - 62f while I was there and if felt great. I was a bit surprised by this since this was the first time back in colder water since October. I guess the mental training then and cold showers all winter long are paying off.

So the week wore on, Thursday came I was to meet Tom for an evening swim. I arrived early and sat at the Ja Lolla cove beach and lifeguard station. Not too many folks were swimming. I looked out a saw 6-8 swells driven by 20+ knot winds and as they reach the cove beach rose to what seemed (This is my 'big fish part of the story') like mountains of water. For real, they were big, for me they were the biggest surf I had ever swum. I was almost gonna pull the plug out of fear, concern for my safety, etc.

Tom arrived as he looked out and said, hey lets get our gear on a go. So we did. Of course I kept thinking to my self 'what am I doing'? We got down to the beach got ready and Tom well times a wasting and we jumped in after a big set of rollers finished. We took off and slowly worked our way out past the next set of rollers. It took me some time to relax. We swam out to the 1/4 mile buoy looked around, I felt better, we chatted. Hearing Tom speak so calmly really gave me confidence since he was clearly comfortable. So we stroked off to another buoy some 1/2 mile I guess away, up and down the big slow rolling 6-8 foot swells. Climbing up one side and almost body surfing down the other. I tried to keep my head down and keep stroking focused on relaxing. Things got easier. Then we headed home to the beach. Now I was a bit nervous again as I knew from coming out that the waves would crash down on me, there were the rocks, etc. So I asked Tom while floating a ways away how to navigate the return and he just pointed me to the outside cove point and then said wait and look for the series of big rollers to pass and then stroke your way into the beach to one side away from the rocks. Nervous, I followed the instructions using an awful lot of heads up swimming and stroking as hard as I could to make my way into the beach, success I was standing on Terra firma, relieved and rewarded.