Making a difference ... the hard truth about attitude in swimming

Swimming in outdoor lakes and rivers is one of life’s most pleasurable experiences, even transcending (some say) the sensations of being in the womb.

The meditative power and calmness of swimming (even in races) affects deeply the mind and body processes as proper technique is learned, focusing on relaxed head down strokes, long body rotations and relaxed breathing patterns one can swim for hours.

But what cannot be taught is emotional resilience in the water or put another way "Gratitude". Ones underlying nature or personality shines through very quickly when open water swimming in dealing with a challenge or adversity. It strips away the professional and politically correct varnish. "It seems in this you either have it or you don't" and its rare to find an open water swimmer without it.

That was until recently... 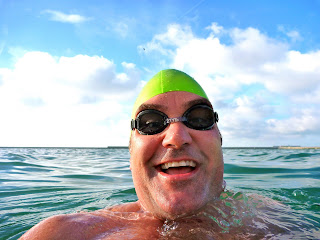 "I witnessed two reasonably fit middle aged tribes-athletes (which by the way has nothing to do with this commentary) finish an open water swim, stand-up, look at their $1000 GPS watches as they unbuttoned their wetsuits, squishing their toes in the warm sand and begin to bitch about their time being too fast? This perked up my ears as its usually the other way around. So I stood by within ear-shot listening...

Astounded they were not congratulating themselves for swimming really well or at worst shortly concluding maybe they miscounted the number of laps swum or forgot to charge their $1000 GPS watches they concluded "the course must have been short, we got ripped off".

The two continued to complain as they walked up the beach insinuating somehow they "got cheated" by having the course be too short while failing to recognize around them this was a charity swim event, it was 70f, clear sunny morning and they had just swum in a clear blue/green lake with not a ripple.

Shocked to what I was witnessing, I stood feet away mesmerized by the emotional weakness of these two "competitors" lacking in gratitude but also in the fact they had spent thousands of dollars on equipment, suits, and who know what else and could have just swum another lap.

The lack of emotional intelligence demonstrated that morning I will bet cripples these two extending into their physical swim ability and likely elsewhere to compete at a higher level.

I wish I could have video tapped the scene and shown you here, it brought together the physical and emotional traits needed to be a winner in life.

Attitude is everything. Swimming is so much more than a race (and don't get me wrong I love to race) but with both ...

One Stroke at a Time
Posted by One_Stroke_at_a_Time at 6:01 PM No comments: