Becoming self aware to achieve Ones Goals

Developing awareness of ones capabilities begins when you step outside your comfort zone. Doing this however takes small steps to be successful and repeatable. Prepare well for each step. 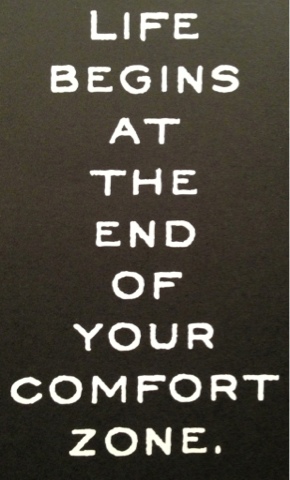 Posted by One_Stroke_at_a_Time at 7:54 PM No comments:

Stressed kids eat even when they’re full - Lack of Resilience ?

For all you One Stroke at a Time readers, This insightful article touches on some points parents might consider for resilience building skills for yourself and your kids.
It suggests one of the factors driving obese kids could be a lack of underlying social and emotional resilience, leading to an inability to properly cope with and manage day-to-day life stress's, eating not for fuel but for comfort. I suppose many of us parents could learn from this as well with the side benefit of heart healthy living. Enjoy the commentary...

PENN STATE / JOHNS HOPKINS (US) — Children who overreact to stressful situations will eat even if they’re not hungry, raising their risk of becoming overweight or obese, a new study shows.

Children whose cortisol levels stayed high after being exposed to a stressor had the highest BMIs and consumed the greatest number of calories in the absence of hunger. (Credit:iStockphoto)
“Our results suggest that some children who are at risk of becoming obese can be identified by their biological response to a stressor,” says Lori Francis, associate professor of biobehavioral health at Penn State. “Ultimately, the goal is to help children manage stress in ways that promote health and reduce the risks associated with an over- or under-reactive stress response.”
For a new study published in the journal Appetite, Francis and her colleagues, Elizabeth Susman, professor of biobehavioral health, and Douglas Granger, director of the Center for Interdisciplinary Salivary Bioscience Research at Johns Hopkins University, recruited 43 children ages 5- to 9-years-old and their parents.

Straight from the Source

Read the original study
DOI: 10.1016/j.appet.2012.11.008
To examine the children’s reactions to a stressor, the team used the Trier Social Stress Test for Children, which consists of a five-minute anticipation period followed by a 10-minute stress period.
During the stress period, the children were asked to deliver a speech and perform a mathematics task. The team measured the children’s responses to these stressors by comparing the cortisol content of their saliva before and after the procedure.
The researchers also measured the extent to which the children ate after saying they were not hungry using a protocol known as the Free Access Procedure. The team provided the children with lunch, asked them to indicate their hunger level and then gave them free access to generous portions of 10 snack foods, along with a variety of toys and activities. The children were told they could play or eat while the researchers were out of the room.
The team found that, on average, the children consumed 250 kilocalories of the snack foods during the Free Access Procedure, with some consuming small amounts (20 kilocalories) and others consuming large amounts (700 kilocalories).
“We found that older kids, ages 8 to 11, who exhibited greater cortisol release over the course of the procedure had significantly higher body-mass indices [BMI] and consumed significantly more calories in the absence of hunger than kids whose cortisol levels rose only slightly in response to the stressor,” Francis says.
“We also found that kids whose cortisol levels stayed high—in other words, they had low recovery—had the highest BMIs and consumed the greatest number of calories in the absence of hunger.”
The study suggests that children who have poor responses to stressors already are or are at risk of becoming overweight or obese. In her future work, she plans to examine whether children who live in chronically stressful environments are more susceptible to eating in the absence of hunger and, thus, becoming overweight or obese, Francis says.
“It is possible that such factors as living in poverty, in violent environments, or in homes where food is not always available may increase eating in the absence of hunger and, therefore, increase children’s risk of becoming obese.”
The Children, Youth and Families Consortium at Penn State and the National Institutes of Health provided funding for this research.
Source: Penn State
Posted by One_Stroke_at_a_Time at 3:19 PM No comments:

The Daily News of Open Water Swimming: The Only Two People In History To Do The Farallons...

The Daily News of Open Water Swimming: The Only Two People In History To Do The Farallons...: What is so cool about this video is how the only two men in history - Ted Erikson and Stewart Evans - helped each other, pushed each other...
Posted by One_Stroke_at_a_Time at 6:58 AM No comments: