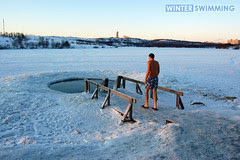 I’d hazard a reasonable guess that what puts people off real cold water swimming is not what I write so much about, hypothermia and cold exposure over long periods but instead, I’d postulate that it is the thoughts and fear of the initial cold shock and of the difficulty and pain involved when one are is immersing oneself and immediately thereafter.
It seems obvious that if you’re not used to long immersion in cold, then the initial pain is all you can relate to, and it becomes the whole story. I say this for two specific reasons:
In human evolution, we have lost much of the defences against cold that other mammals have. We have no immediate protection of either fur or significant fat, to protect in case of sudden cold immersion. Instead we have evolved as tool-makers, and provide our own thermal micro-climate in the form of clothing. To go voluntarily into cold water without external protection therefore strips away the defences we have developed, casts us back a hundred thousand years, and we go into an environment against which we cannot win or survive.
Cold water swimmers are time-travellers, returning to a state from our evolutionary past when all modern physical advantages are stripped away, but we can still use the main tool, the primate brain, to understand what is happening.
Cold water, which in sea survival terms is defined as water as high as 25º Celsius, will always eventually make you hypothermic.
Before I get de-railed into another discussion of non-shivering thermogenesis (another day), I’d therefore say that our avoidance of cold immersion is a autonomic subconscious defence mechanism. Fire, heights,  cold, there are all environmental factors that could and would have instantly killed our ancestors, so we evolutionarily selected to be fearful of these dangers.
Along with this seemingly universal response, there are my own reactions as a trained and experienced cold water swimmer. I’ve been swimming in skin through the Irish winter since the winter of 2007/2008, in preparation for the two-way English Channel relay. Not as long as some, longer than others.
On a cold morning, even earlier in the winter, it is still not easy to start. I sometimes faff about for a while, watching the water, chatting to anyone around, fiddling with swim gear, all seem to be a subconscious avoidance mechanism. I finally get changed, and once that is done, I move quickly to the water’s edge. Because bad as it sometimes is to get in, staying out longer will only make it worse. I often find myself in those few seconds prior to immersion, whether at the edge or waist deep, standing on freezing concrete and steel steps, asking myself what the hell I am doing, dreading the immersion. And then unlike the summer, I need a few seconds to settle internally.
I’ve written before about the drop in stress hormone production that was key for me understanding the exposure increases in experienced swimmers. Though I am always a bit apprehensive prior to cold water, let’s set that arbitrarily today at about 8º Celsius, it hasn’t for a long time resulted in increased pre-swim heart rate. There’s no longer any specific strong physical manifestation of pre-cold-swim nervousness. But there remains a certain mental edginess. This is of course attenuated by the invaluable knowledge that comes to all experienced cold water swimmers: It hasn’t killed me before, there’s no reason to believe it will kill me this time. This sounds melodramatic, but it simply means that I have valuable experience, not that I consciously worry if the cold will kill me. However it is a fact that non-swimmers worry about precisely this fact. And if I, as a very experienced cold swimmer carry this nervousness, then it stand to reason that the less experienced you are with cold, the more that immersion shock worries you. I simply understand that immersion in cold water will hurt. It’s simply a fact, regardless of experience.
Back to me, standing there at the Guillamenes. We’ll assume a mid-tide, it’s not important, but it allows me to stand on the new metal platform below the steps. The water is up to my knees.
Stepping into cold water isn’t that bad. Walking down the concrete steps will make the soles of my feet cold. The rest of my feet and lower legs don’t have a high density of thermoreceptors, so there isn’t much cold pain. During deep winter, I’ll take a few slow deep breaths and ensure I feel calm. A last push on of my earplugs and make sure my goggles and cap are correctly in place. Then I splash the water on my face. Once that is done, I am ready and dive out.
The first ten seconds seem the worst (but in not in fact). For a new swimmer to deep water this is very difficult though. For cold water, relative to your experience, but the thermo-receptors suddenly start sending lots of messages to the brain, that are indistinguishable from pain. I’ve discussed thermo-receptors previously so we won’t divert there either.
So we are overwhelmed to some lesser or greater extent by the pain of cold sensations. By thirty seconds into the swim, we enter the most dangerous phase, cold shock. Humans have a mammalian diving reflex, which is an autonomic response to sudden immersion, which causes us to hold our breath, and slows our heart-rate and circulation. However cold water, and for this specific case, studies by Frank Golden identified this as water under 15° Celsius, the mammalian diving reflex is overcome by cold shock. Cold shock doesn’t occur immediately, but from 30 seconds to 3 minutes afterwards.
All these changes can lead to

If you do not experience a cardiac arrest of stroke, there is still the possibility of swim failure, which can lead to drowning, due to water aspiration, weakness or confusion.
These are all the worst case scenarios, but all real and happen more regularly with boat crews. Regular immersion decreases all these possibilities and symptoms, but does not eliminate them. The Golden studies mentioned above show cold shock can be reduced by 50% after only a week of cold showers. Fitness also decreases the cardiac arrest and stroke possibilities.
If the water is under about 8° Celsius, I feel that real shock only after those first few seconds and it lasts long than at 10° or above. I don’t really fell any above 14°.  My stroke is ragged, and I don’t try to fight it. I deliberately flail and swing my arms. My breathing rate is elevated, I am not bilaterally breathing as I usually do, but breathing every second stroke, to accommodate the hyperventilation. I swim across the Guillamene Cove, 75 metres wide, passing Ballyheigue rock, following the coast. Once I reach 100 metres, outside the cove, I can feel, for me, the worst has passed. For others less trained, the difficult period will last longer. For those with little training at all, having got through this period, they may never reach a state of comfort in the cold, the cold/pain from the facial thermo-receptors remaining strong enough that they must exit the water.
Our fears of cold immersion are based on a visceral knowledge that sudden cold water is dangerous. We usually don’t know why, but the reasons are all sound. The dangers inherent in entering cold water are higher than of hypothermia, more deaths are caused by sudden cold immersion than by hypothermia, but are ameliorated by training and regular exposure.
So swim in cold water. It will make you safer.
Posted by One_Stroke_at_a_Time at 7:52 PM No comments: