Athletes Back to School Nutrition

As we send our kids back to school (especially our young athletes) its important to remember nutrition from natural sources, less supplementation and removing processed foods that are high in fat, triglycerides and cholesterol's. 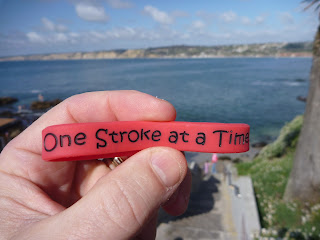 Here is a great article from Swim Science that applies to all sports, including softball, football and even cheer leading:

Back to school nutrition is one of many changes swimmers face as they head back to school. In this post we’ll discuss some important considerations for keeping young swimmers optimally fueled during the school year.  It’s ironic that coaches will plan workouts down to the second, rely on high tech video cameras to correct strokes,  we’ll remove hair from the entire body to save hundredths of a second during championships, yet nutrition is often an unregulated free-for-all.

Meal Timing
Does anyone see the irony of athletes (all ages) boasting of their dedication to train twice a day for 5-6 hours, yet they can’t devote ten minutes to preparing a halfway decent breakfast?  Swimmers partially get a pass here due to getting up long before dawn, but preparing a smoothie or finding something moderately nutritious still takes less time than the drive through at McDonald's!

Although breakfast is generally accepted as important, there’s surprisingly little research formalizing its value in youth athletes.  That said, commonsense indicates the importance of a stable blood sugar throughout the day, plus the need for adequate calorie intake. Better to fuel more regularly during the by including breakfast, rather than make up for calorie deficit later in the day (or run a chronic deficit).  Preparation for afternoon practice starts the moment you wake up.

Despite the obesity epidemic in the general population, young swimmers often have difficulty consuming adequate nutrients.  Not only may chronic malnourishment result in poor performance, it may also result in poor health and increased rehab time.  Nothing is more frustrating to athletes of any age than to do all the right things for prevention and rehab of musculoskeletal injuries only to make no progress.  Sometimes injuries are more than just muscles, tendons, ligaments, and bones.

Studies have shown that poor nutrition, especially in female athletes, is significantly correlated with musculoskeletal injury (Reinking 2006, Rauh 2010).  Though we might surmise that ground contact might cause most injuries in terrestrial sports, the latter study (Rauh 2010)did include swimmers.  Authors did not find a statistically significant relationship of any particular sport driving the overall results.  The exact mechanism behind the nutrition/injury connection is unclear (lack of nutrients,persistence of inflammation, hormonal stress are three possible areas), but it is clear that better nutrition can have protective and recuperative effects in young swimmers.

Hydration
Energy drinks often augment or replace meals, especially during the school year.  It’s a quick and easy solution when morning homeroom starts a mere thirty minutes after the last set ends in the pool.  Kids (and adults) don’t get enough sleep which can lead to lasting fatigue when coupled with training hard and having a heavy load at school,.  Woe to the kid that misses intervals in practice but tries to blame last night’s science project and last week’s midterms for slow swimming.  What’s the quick and easy solution…

One thorny area is the distinction between energy drinks and sports drinks.  Though sports drinks (Gatorade, Powerade, etc) are generally deemed safe and effective for young swimmers, energy drinks(Red Bull, Rockstar) are still uncertain. Because they are so new, there simply isn’t much non-company sponsored research on young athletes on which to evaluate their safety.  Still, sports drinks aren’t entirely risk free due to their high calorie and sugar content.  As for energy drinks, the American Council of Sports Medicine (2010) notes,

“Using energy drinks instead of sports drinks for rehydration can result in ingestion of potentially large amounts of caffeine or other stimulant substances and the adverse effects previously described. Of additional concern is the intentional use of energy drinks by adolescents who desire stimulant effects to combat fatigue and increase energy during sports and school activities.”

Supplements vs. Real Food
We adults, as a whole, do a poor job of providing kids with optimal nutrition choices, and ironically the situation doesn’timprove at sporting venues.  In one study from Australia, “Parents reported that their child's most frequently purchased food and beverage items at outdoor sports fields were water, chocolate and confectionery, soft drink and sports drinks, and ice cream. At community swimming pools the most frequently purchased items were ice cream, followed buy snack foods, including chips, cakes and biscuits.” (Kelly 2008)

Kids end up supplementing because they don’t have the basics in the first place, leading to more involvement with supplements than is necessary.  The school year is a ripe time for supplementation as it offers an easy shortcut around meals.  However, lack of quality nutrition is not the only reason for supplementation (“because the pros do it” is another reason…).

“A major concern for health professionals and the sporting community is that the effects of supplement use on the growth and development of children and adolescents are unclear. Minimal experimental research exists regarding the performance enhancing qualities or adverse effects of ergogenic substances focusing exclusively on adolescent athletes under the age of 18. Many physiological changes are occurring during these developmental stages thus making it difficult to fully understand the physiological implications of regular consumption of supplements by this age group.” (McDowell 2007)

In sum, ssupplements occupy a relatively lawless frontier.  Whereas food recommendations are highly regulated (whether you agree with all of them is a different matter), the supplement industry often operates outside the realm of normal oversight.   No matter what the time constraints, do your best to obtain your young athletes’ nutrition from real foods.

Conclusion
Despite these warnings, I do recognize the importance of practicality: It’s entirely unrealistic to wake up to sauteed egg whites with meat from the local butcher and buckwheat pancakes with maple syrup you harvested in your backyard, accompanied by a fruit potpourri from the farmer’s market.  An instant breakfast shake is sometimes the best a kid can do, but we still must be aware of the pitfalls in meal timing, hydration, and use of supplements.  Avoid the pitfalls in theseareas to ensure you don’t thwart your kids’ efforts in the pool.

Posted by One_Stroke_at_a_Time at 7:18 AM No comments:

Open Water Swimming Video on our sport and Olympics

Posted by One_Stroke_at_a_Time at 6:57 AM No comments: 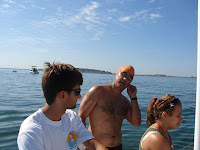 Monitoring your resting heart rate over time is critical to tracking your both your health and endurance. Engage in life, One Stroke At A Time.

Article Link: http://www.addthis.com/bookmark.php
Posted by One_Stroke_at_a_Time at 6:20 AM No comments: 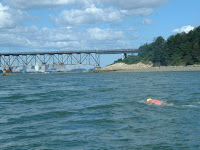 Posted by One_Stroke_at_a_Time at 6:36 AM No comments:

In learning about my own cardio health and endurance training as I slowly gear back up for an english channel attempt in 2014, I found this article on endurance training impacts rather interesting and worth sharing. Consider monitoring your cardiac health by benchamrking your fitness along the way as everyone is different.

Regular exercise is highly effective for the prevention and treatment of many common chronic diseases, and improves cardiovascular health and longevity. However, recent research suggests that chronic training for, and competing in, extreme endurance exercise such as marathons, iron man distance triathlons, and very long distance bicycle races may cause structural changes to the heart and large arteries, leading to myocardial injury. A study in the June issue of Mayo Clinic Proceedings reviews the literature and outlines in detail for the first time the mechanisms, pathophysiology, and clinical manifestations of cardiovascular injury from excessive endurance exercise.

"Physical exercise, though not a drug, possesses many traits of a powerful pharmacologic agent. A routine of daily physical activity can be highly effective for prevention and treatment of many diseases, including coronary heart disease, hypertension, heart failure, and obesity," says lead author James H. O'Keefe, MD, of Saint Luke's Hospital of Kansas City, MO. "However, as with any pharmacologic agent, a safe upper dose limit potentially exists, beyond which the adverse effects of physical exercise, such as musculoskeletal trauma and cardiovascular stress, may outweigh its benefits."

Dr. O'Keefe and his colleagues present emerging data suggesting that extreme endurance training can cause transient structural cardiovascular changes and elevations of cardiac biomarkers, all of which return to normal within one week. For some individuals, over months and years of repetitive injury, this process can lead to the development of patchy myocardial fibrosis, particularly in the atria, interventricular septum, and right ventricle, and an increased susceptibility to atrial and ventricular arrhythmias. In one study, approximately 12% of apparently healthy marathon runners showed evidence for patchy myocardial scarring, and the coronary heart disease event rate during a two-year follow up was significantly higher in marathon runners than in controls.

Although it has been recognized that elite-level athletes commonly develop abnormal electrocardiograms and atrial and ventricular entropy, these adaptations traditionally have not been thought to predispose to serious arrhythmias or sudden cardiac death. However, it now appears that the cardiac remodeling induced by excessive exercise can lead to rhythm abnormalities. Endurance sports such as ultramarathon running or professional cycling have been associated with as much as a 5-fold increase in the prevalence of atrial fibrillation.

Lifelong vigorous exercisers generally have low mortality and disability rates and excellent functional capacity, Dr. O'Keefe notes. He suggests that further investigation is needed to identify who is at risk for adverse cardiovascular remodeling, and to formulate physical fitness regimens for conferring optimal cardiovascular health and longevity.
Posted by One_Stroke_at_a_Time at 4:02 PM 1 comment: