The Heart - Swimmer vs. Runner and Athletic Heart Syndrom

The Heart of a Swimmer  vs. Runner 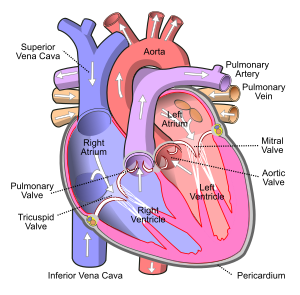 Regular exercise changes the look and workings of the human heart. And researchers are discovering that different sports affect the heart differently.
Reprinted from Gretchen Reynolds and related articles in Wikipedia

Do world-class swimmers’ hearts function differently than the hearts of elite runners?

A new study finds that the answer may be yes, and the differences, although slight, could be telling and consequential, even for those of us who swim or run at a much less lofty level.

Cardiologists and exercise scientists already know that regular exercise changes the look and workings of the human heart. The left ventricle, in particular, alters with exercise. This chamber of the heart receives oxygen-rich blood from the lungs and pumps it out to the rest of the body, using a rather strenuous twisting and unspooling motion, as if the ventricle were a sponge being wrung out before springing back into shape.

Exercise, especially aerobic exercise, requires that considerable oxygen be delivered to working muscles, placing high demands on the left ventricle. In response, this part of the heart in athletes typically becomes larger and stronger than in sedentary people and functions more efficiently, filling with blood a little earlier and more fully and untwisting with each heartbeat a bit more rapidly, allowing the heart to pump more blood more quickly.

While almost any exercise can prompt remodeling of the left ventricle over time, different types of exercise often produce subtly different effects. A 2015 study found, for instance, that competitive rowers, whose sport combines endurance and power, had greater muscle mass in their left ventricles than runners, making their hearts strong but potentially less nimble during the twisting that pumps blood to muscles.

These past studies compared the cardiac effects of land-based activities, though, with an emphasis on running. Few have examined swimming, even though it is not only a popular exercise but unique. Swimmers, unlike runners, lie prone, in buoyant water and hold their breaths, all of which could affect cardiac demands and how the heart responds and remakes itself.

So, for the new study, which was published in November in Frontiers in Physiology, researchers at the University of Guelph in Canada and other institutions set out to map the structure and function of elite swimmers’ and runners’ hearts.

The researchers focused on world-class performers because those athletes would have been running or swimming strenuously for years, presumably exaggerating any differential effects of their training, the researchers reasoned.

Eventually they recruited 16 national-team runners and another 16 comparable swimmers, male and female, some of them sprinters and others distance specialists.
They asked the athletes to visit the exercise lab after not exercising for 12 hours and then, when on site, to lie quietly. They checked heart rates and blood pressures and finally examined the athletes’ hearts with echocardiograms, which show both the structure and functioning of the organ.

It turned out, to no one’s surprise, that the athletes, whether runners or swimmers, enjoyed enviable heart health. Their heart rates hovered around 50 beats per minute, with the runners’ rates slightly lower than the swimmers’. But all of the athletes’ heart rates were much lower than is typical for sedentary people, signifying that their hearts were robust.

But there were interesting if small differences between the swimmers and runners, the researchers found. While all of the athletes’ left ventricles filled with blood earlier than average and untwisted more quickly during each heartbeat, those desirable changes were amplified in the runners. Their ventricles filled even earlier and untwisted more emphatically than the swimmers’ hearts did.

In theory, those differences should allow blood to move from and back to the runners’ hearts more rapidly than would happen inside the swimmers’.

But these differences do not necessarily show that the runners’ hearts worked better than the swimmers’, says Jamie Burr, a professor at the University of Guelph and director of its human performance lab, who conducted the new study with the lead author, Katharine Currie, and others.

Since swimmers exercise in a horizontal position, he says, their hearts do not have to fight gravity to get blood back to the heart, unlike in upright runners. Posture does some of the work for swimmers, and so their hearts reshape themselves only as much as needed for the demands of their sport.

The findings underscore how exquisitely sensitive our bodies are to different types of exercise, Dr. Burr says.

They also might provide a reason for swimmers sometimes to consider logging miles on the road, he says, to intensify the remodeling of their hearts.

Of course, the athletes here were tested while resting, not competing, he says, and it is not clear whether any variations in their ventricles would be meaningful during races.
The study also was cross-sectional, meaning it looked at the athletes only once. They might have been born with unusual cardiac structures that somehow allowed them to excel at their sports, instead of the sports changing their hearts.
Dr. Burr, however, doubts that. Exercise almost certainly remakes our hearts, he says, and he hopes future experiments can tell us more about how each activity affects us and which might be best for different people.

In other articles summarized here from Wikipedia (https://en.wikipedia.org/wiki/Athletic_heart_syndrome)

We find discussion of Athletic heart syndrome (AHS), also known as athlete's heart, athletic bradycardia, or exercise-induced cardiomegaly is a non-pathological condition commonly seen in sports medicine, in which the human heart is enlarged, and the resting heart rate is lower than normal.

The athlete's heart is associated with physiological remodeling as a consequence of repetitive cardiac loading. Athlete's heart is common in athletes who routinely exercise more than an hour a day, and occurs primarily in endurance athletes, though it can occasionally arise in heavy weight trainers. The condition is generally considered benign, but may occasionally hide a serious medical condition, or may even be mistaken for one.

Athlete's heart most often does not have any physical symptoms, although an indicator would be a consistently low resting heart rate. Athletes with AHS often do not realize they have the condition unless they undergo specific medical tests, because athlete's heart is a normal, physiological adaptation of the body to the stresses of physical conditioning and aerobic exercise. People diagnosed with athlete's heart commonly display three signs that would usually indicate a heart condition when seen in a regular person: bradycardia, cardiomegaly, and cardiac hypertrophy. Bradycardia is a slower than normal heartbeat, at around 40–60 beats per minute. Cardiomegaly is the state of an enlarged heart, and cardiac hypertrophy the thickening of the muscular wall of the heart, specifically the left ventricle, which pumps oxygenated blood to the aorta. Especially during an intensive workout, more blood and oxygen are required to the peripheral tissues of the arms and legs in highly trained athletes' bodies. A larger heart results in higher cardiac output, which also allows it to beat more slowly, as more blood is pumped out with each beat.

Another sign of athlete's heart syndrome is an S3 gallop, which can be heard through a stethoscope. This sound can be heard as the diastolic pressure of the irregularly shaped heart creates a disordered blood flow. However, if an S4 gallop is heard, the patient should be given immediate attention. An S4 gallop is a stronger and louder sound created by the heart, if diseased in any way, and is typically a sign of a serious medical condition.

Posted by One_Stroke_at_a_Time at 1:17 PM No comments: