My distance coach, Marcia Cleveland has said a curious statement several times when describing training for the Channel; you have to "let go ... don't try to control things". Little did I know how true this was to be when no sooner did I walk into the pool to learn yards became meters.  The pool was a meter vs. yard pool, that means about 10% longer distance. My original 10,000 yard swim quickly became a 11,154 yard (10,000 meter) swim but this didn't phase me as I knew the distance was not an issue. My goal all along was consistency of time per segment.

I knew to play it cool early on as the "kids" thrashed away the first 20 or 30 sets while I averaged 1:30's per 100 meters. I felt very relaxed the whole way, keeping my heart rate at 130 beats per minute. By the end I was swimming as fast or faster than a good portion of these same kids consistently finishing between 1:20 and 1:25 per 100 for each of the last ten. Then of course Rachel, my daughter, said "come on dad can't you go faster, she said dad I swim my 100 free in a 1:03? ... with only the look of a proud father she could see, I said good point and said "well I probably should make the last one the fastest, so I clipped off a 1:13 and with that finished just a hair over 3 hours.

In the end a nice training swim and thats another 6.3 miles in the bag or as I am becoming fond of thinking ... that was 25% across the English Channel.
Posted by One_Stroke_at_a_Time at 3:24 PM No comments:

Alcatraz swim with my sister

Forgot to tell everyone early this fall but the day after I swam my Alcatraz race, Katie did the same as part of a triathlon race. Her she is with her husband Ted after. 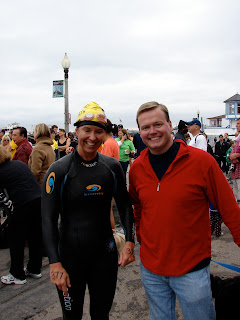 Posted by One_Stroke_at_a_Time at 5:13 PM No comments:

Decided that an early winter endurance test of my training might be fun and something different to see how both physical as well as the mental training (i.e. spending long periods of time going back and forth in a pool) are shaping up. Decided to try the 100 x 100 yards (10,000 yards or 5.6 miles) race at the Latoff Chicago YMCA on December 27th. I figure it should take me a little over three hours at a relaxed pace of 1:30 per. This should be simple for the first 50-60 but later as the mind begins to tire I suspect it will become a little harder, but thats the point, work on the mental toughness since 400 laps.

Training otherwise keeps plugging along at 20k yards this past week.  Adding weights has gotten my shoulders sore but working through it. Last night at practice we did a whole workout in sweat shirts. I brought along my trusty old heavy duty Indiana sweatshirt (what the hell was I thinking??). Needless to say I felt like a drowning rat but managed to keep going through 4000 yards (2+ miles). for awhile I thought i was back in Goshen swimming a "Rathke" practice with Steve Conder in lane 1?

Posted by One_Stroke_at_a_Time at 5:09 PM No comments:

Workout yardage continues at 20 - 25,000 yards a week but now have added 2 weight lifting sessions per week and on those days cut back yardage a bit to balance my energy needs. This of course means I had to up the yardage on the remaining days. Pretty sore, so taking these weeks slow and steady to protect my shoulders as I build up muscle. Despite being tired and a now able easily repeating 100's at 1:15 minutes and typically hold these for 1000 - 2000 yards within a total workout of 5000. So despite be sore and tired the base conditioning continues to improve which is a nice step forward.

For all you old Goshen swimmers you'll remember this classic christmas swim set ... 100 x 100 yards ... The Lattoff YMCA nearby my house is hosting a swim meet in December and the only race is 100 x 100. This will be a good test of both my mental and physical conditioning (thats 10,000 yards or 5.6 miles but in a very boring 25 yard pool). I'll be able to test some of my nutrition supplements and timing of taking them for longer swims (high glucose gelpak's and electrolite replacement drinks).

I continue to seek out a charity to link/support with my efforts. I sent an email to the CEO of "Swim across America" to see if they might be interested, they sponsor all sorts of swims throughout the US on behalf of the american cancer society. Waiting to hear back on this one. I also have given some thought to setting up a specific scholarship drive for Goshen athletics that folks from Goshen could support and the same for the town I live in now Barrington, IL.
Posted by One_Stroke_at_a_Time at 9:55 AM No comments: