I Dare You ... to Swim in the Chicago River

Swimming in the Chicago River requires two things you had as a kid but lost in adulthood. 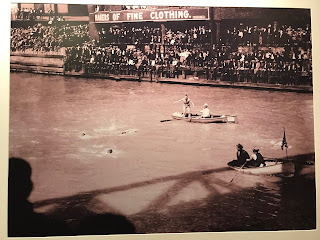 Courage and a sense of adventure.

What the City of Chicago however continues to say is that its toxic, but what they really don't say is that its not and they prefer not to spend further capital to improve the water and enforcement of existing discharge laws and infrastructure upgrades.

Swimming in Lake Michigan while it appears to be safe is a 'play it safe' move. But we all know that's not life, life if messy and comes with risks (which we are all too our public officials try to legislate away). Lake Michigan has the exact same bacteria as the river and from time time the City discharges directly into the lake (our drinking water source) when it rains too hard like this fall 2017.

But life happens. Risk as simple as slipping on ice stepping off a curb in the busy city to walk across the street, flying, driving a car, riding your bike on the Lake Shore bike trail, walking along the new River walk (where there are little to no safety life rings and ladders in case you fall in).

I get it that certain people are afraid, including our government officials, but that's in part what we pay them to do for us, protect us. They're asking us (the organizers of the swims) the tough and right questions doing their job as the public should expect.

Perhaps the City should focus on preventing more risky behaviors like gun deaths. Lets get some common sense in allowing the river swim like the chicago marathon or triathlon. Its an opportunity to further highlight the billions of dollars already spent on the riverwalk.

Besides who wants to spend $3M on a river condo to hear its "toxic" and see poop floating by?

I think we get the point, now be leaders like most other cities are already doing New York, Boston, San Francisco, etc.